Aneuploidy, an abnormal number of chromosomes that differs from a multiple of the haploid, is a common feature of tumor cells, occurring in ~85% of all human cancers. The prevalence of aneuploidy in cancers was recognized over 100 years ago, leading Theodor Boveri to propose that the primordial cells of tumors are aneuploid. We tested the hypothesis that aneuploidy drives tumorigenesis using cells and animals heterozygous for the mitotic kinesin CENP-E. CENP-E is required for optimal functioning of the major cell cycle checkpoint that regulates chromosome segregation, the mitotic checkpoint (also known as the spindle assembly checkpoint). CENP-E also participates in chromosome segregation by facilitating the attachment of chromosomes to spindle microtubules. Reduction of CENP-E leads to missegregation of one or a few whole chromosomes per division. (Figures 1 and 2 and Weaver et al, JCB, 2003) Importantly, CENP-E is highly cell cycle regulated and accumulates specifically during mitosis, strongly suggesting that cells with reduced levels of CENP-E do not develop defects other than chromosome missegregation and aneuploidy.

As predicted by the hypothesis that aneuploidy drives tumorigenesis, CENP-E+/- animals developed an increased level of spleen and lung tumors. Surprisingly, however, CENP-E+/- animals developed fewer, smaller liver tumors than wild type littermates. Reduction of CENP-E also increased tumor latency in animals lacking the ARF tumor suppressor and decreased tumor formation after treatment with the DMBA carcinogen. These results demonstrate that aneuploidy can suppress tumors as well as promote them, and that the effects are context dependent. (Weaver et al, Cancer Cell, 2007)

Aneuploidy can promote tumors, suppress them, or do neither, depending on the context. To determine the relevant contextual factors, we looked for a common feature in the three types of tumors that were suppressed by reduction of CENP-E (see previous section). All three contexts had a pre-existing rate of chromosomal instability (CIN; Movie 1). When combined with CIN due to reduction of CENP-E, they missegregated larger numbers of chromosomes per division (Movie 2), resulting in high rates of CIN and elevated levels of cell death. To further test the hypothesis that high CIN leads to cell death and tumor suppression, we reduced the level of CENP-E in one animal model known to exhibit a low rate of CIN (Mad2+/-) and two models which do not exhibit CIN (INK4a-/- and MLH1+/-). As predicted, reduction of CENP-E in Mad2+/- animals increased rates of CIN and cell death and suppressed tumor incidence. Reduction of CENP-E did not affect tumor onset in animals that developed tumors due to insults that do not themselves induce CIN (INK4a-/- and MLH1+/-). These data support the hypothesis that low rates of CIN are weakly tumor promoting. However, combining two insults that each cause a low rate of CIN results in high CIN, cell death and tumor suppression. (Silk et al, PNAS, 2013 )

These results suggested that increasing the rate of CIN over a maximally tolerated threshold may be a useful strategy for anti-cancer therapy. Since these therapies are only used for existing tumors, one important remaining question was whether high CIN suppresses tumor growth and progression or can only inhibit the earliest stages of tumor initiation. We tested this by crossing CENP-E+/- mice with APC Min/+ animals, which exhibit low CIN due to lagging chromosomes and develop spontaneous intestinal tumors with short latency.  Effects on tumor initiation versus progression can be distinguished by quantifying tumor size and multiplicity.  As expected, mice doubly heterozygous for CENP-E and the APC Min allele had high CIN leading to cell death and tumor suppression. Importantly, high CIN suppressed tumor growth and progression without inhibiting tumor initiation. These data support the therapeutic potential of treatments that increase the rate of CIN over a viable threshold (Zasadil et al, MBoC 2016). 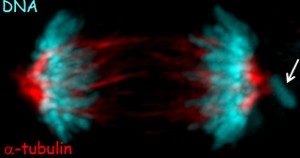 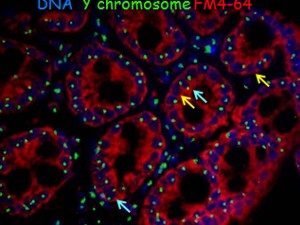 Figure 2. Fluorescence in Situ Hybridization (FISH) image of the Y chromosome in the large intestine of a mouse that is heterozygous for CENP-E. While most cells contain the expected, single copy of the Y chromosome, some cells have lost their copy (yellow arrows) or gained an additional copy (turquoise arrows).

Movie 1. Low CIN due to missegregation of a single lagging chromosome in an ARF-/- primary MEF.

Movie 2. Reduction of CENP-E in an ARF-/- MEF increases the number of chromosomes missegregated per division, resulting in high CIN.